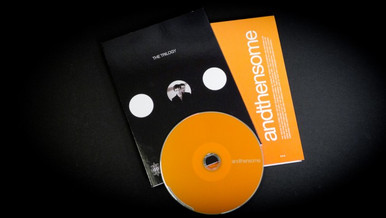 The Trilogy: andthensome by Dan and Dave Buck

Over a year in the making, andthensome contains over 2.5 hours of new tricks and flourishes and everything else Dan and Dave have dreamt up with a decks of cards. Included are over 50 new creations including the much anticipated GOAT change as well as some of the most visual magic they have created to date.

Dan and Dave are known for setting trends in card magic and the content on this DVD is sure to continue this by inspiring both old and new magicians alike. Everything was filmed in crystal clear HD and shot from multiple angles for a seamless learning experience. Their instructional ability has evolved to an expert level as they not only go into intricate detail on all the mechanics, but explain the misdirection, and body language necessary to achieve maximum impact for each effect. For the more convoluted of sleights and flourishes, extreme close-ups and slow motion replays are provided for both an informative and enjoyable experience.

Portal: A visual teleportation of a selected card from one hand to the other. The effect combines a rhythmic display of cardistry and magic.

Osh Negash B'gosh: Imagine a card selected by being propelled through mid-air and caught between two mates. The card is noted and the packet placed on the table. Another selection is openly made and instantly changes into the first selection. When the sandwiched card on the table is turned over by the spectator, they find it to be the second selection. An extremely powerful table-hopping effect!

Encore: Perhaps the most direct handling of Dr. Daleyâ€™s Last Trick ever devised. The method here is far more devious than any previous version of this effect. Two red Aces are cleanly set on one spectators palm while the two black Aces are set on another spectators palm. With a snap they instantly transpose and the spectators can turn them over.

Hedberg All Over: A variation of Hedbergs Peak, this multi-phased routine demonstrates the transposition of two playing cards throughout the deck with each transposition becoming more impossible looking. On the final phase one of the cards is placed between the spectatorsâ€™ hands and the transposition is carried on.

Flic
Maybe the easiest boomerang card technique you will ever learn. This age old method allows you to â€œflickâ€ a card 10 feet away from you only to have it return to your hand.

M4 Hollywood
In this variation of Molecule 4 packets rotate, twist, and spin around each other demonstrating a chaotic but orchestrated rhythm or Cardistry.

Goat
A card is placed protruding face up in the deck. With the snap of the fingers the card instantly changes. The change can be done completely surrounded and you end clean with nothing but the changed card sticking out from the deck.

Shepherd Change
A card is placed protruding face up in the deck. On spinning it around it appears to morph into another card. Youâ€™re left clean with only the changed card sticking out from the deck.

Orbit: This unique technique for propelling a double from one hand to the other will attract attention from across the room. Use it as a double lift or a flourish.

Ginastaire: A flashy technique for spinning two cards as one on the back of your thumbs' knuckle. Can also be used as a flourish.

Spinning Top: Mimicking the action of one of the oldest recognized toys in history called a â€œtopâ€. This double lift allows you to spin the cards on the deck or on a table in a fast motion while keeping them aligned.

Jones Change Variation: Refined with flare that only the Bucks could exude. This is an underground gem finally revealed that allows you to show your hand empty (with one card) before and after the change has been made.

Smoother: This impromptu technique allows you to rid the rough and uneven edges on most decks of cards.

Manfred Shuffle: A unique approach to the in-the-hands false riffle shuffle that borrows ideas from Ron Whol and Hank Miller. This method, however, puts the deck in full order without the need for a cut.

Simpler Switch: This sleight can be used as a one-for-one switch or a color change. The switch happens in-flight and the card appears to be in view the entire time.

Spinning Table Top: Same as Spinning Top, but further explained on the table.

Hover Spring & Autocatch: One of the coolest tricks on the DVD in our opinion. It's a sandwich effect, but happens visually with a neat flourish you probably can already do, but don't know it yet.

Blind Bluff // Tip: One of the most beautiful and deceptive bluff passes you'll ever learn with an ingenious touch that allows a selected card to be controlled to the top.

Back Flic: Variation of Flic that allows for the card to boomerang around your shoulder.

Jones Change Transpo: By use of the Jones Change 2, this effect allows you to show two different cards in each hand. Without ever touching hands, you cause them to switch places.

DD Square: An esthetically pleasing manner of giving the cards an all-around-square-up on the table.

Double Pirouette: The classic Pirouette flourish done with two cards! And yes, they stay together as one.