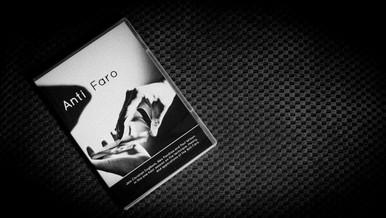 To perfectly interweave a deck, that is shuffle the cards one-for-one, is by far one of the more challenging feats of our craft. Known as a faro, this form of perfect shuffle has many applications for the magician. However, if one were able to unmix the cards, that is separate them one-for-one, this could provide unparalleled support for new possibilities. The Anti-Faro, a concept devised by Christian Engblom, which accomplishes exactly what its name implies, is real and finally revealed.

The Anti-Faro is a groundbreaking discovery and a singular leap forward into the design and construction of effects utilizing the faro. It is no surprise Christian's method for unshuffling the cards has reached legendary acclaim in recent years. Once thought impossible to achieve, the Anti-Faro has evolved mechanically from a concept to an efficient technique.

Whether you're willing to challenge yourself to learn the Anti-Faro, or are simply curious about its potential, this video offers an in-depth course on everything from the inspiration and concept to the physics behind why and how it works. For those of you incredulous about its practicality, witness it executed perfectly several times over and discover how even a not-so-perfect Anti-Faro can be useful.

"When we first heard about the Anti-Faro we had little understanding of how it could work or if it were even possible. At the time, it was only being talked about and no one had seen it executed perfectly. We were adamant it could be done though and after two years of practice, we only began to experience near complete anti-faros.

Had we known what we know now, we could have become fluent in the Ant-Faro in just a few short months."

Join Christian Englbom, Alex Pandrea and Paul Wilson in this one-hour session on the technique, theory, and applications of the Anti-Faro.