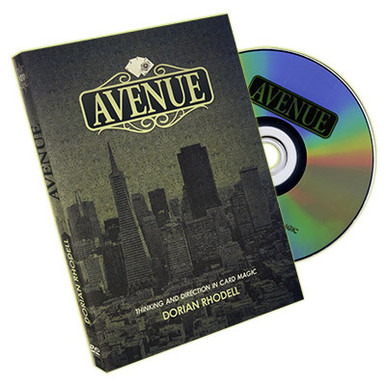 Please check back at a later stage.

Dorian Rhodell is not only an avid practitioner of card magic, he is also a former student of the late Larry Jennings. His style and technique, although more classical, have been tailored for a modern audience and will suit any performance atmosphere.

The effects explained on this DVD have served his professional repertoire for many years and are sure to bring new wonder and excitement to your audiences.

"An amazing student, an excellent performer, and an insightful creator. Dorian combines worldliness and charm with expert sleight-of-hand and his own quirky brand of humor to deliver stunning results." - Paul Chosse

Journey down an avenue of classic design, modern thinking and professional direction and experience the card magic of Dorian Rhodell.

For the most part, the following effects utilize a sleight known as Pughe's Pass. Dorian uses this sleight as a color change and thoroughly explains all the mechanics behind it.

Grease Lightning v1: A visual transposition of the four aces and the four kings that goes like this: A spectator is asked which would they prefer, "Aces or Kings?" Whatever their choice, these four cards, let's say Kings, are cleanly inserted into separate parts of the deck and left protruding. The Aces are placed face up on top. With just a snap, the Aces visually change into Kings. The protruding cards are removed and shown to be the Aces.

This is a remarkable effect that gets killer reactions.

Grease Lightning v2: This is a variation of Grease Lighting that will fool even magicians. Perhaps one of the most visual and direct effects on the DVD.

Snap Exchange: Similar in effect to Grease Lightning, however, this time the four Kings are placed face down in four different parts of a face-up deck. After the aces are placed face up on top and then suddenly change into the Kings, the whole deck is spread out to reveal the four Aces are now reversed in the deck.

Joyride: A sandwich effect utilizing a four of a kind, such as the four Jacks. Not only do the Jacks find the selection, they mysteriously transpose with each other a few times giving a new twist on this classic effect.

This quick little tricks plays big and gets even bigger reactions.

Sidetracked: After four Queens are presented, the magicians asks for three selections to be made. These cards are noted and set aside. The magician, holding the Queens in his hand, instantly changes them into the three selections. The Queens are now cleanly shown to be the cards on the table (or in a spectators hand).

A.F.I.: Here is Dorian's take on the classic Inversion effect. Any card is selected and placed back into the deck. With no apparent moves, the selection instantly turns face down. The next time the magician leaves the selection sticking out of the deck, however, instead of the card turning over, the whole deck visually turns face up right in front of the spectators eyes.