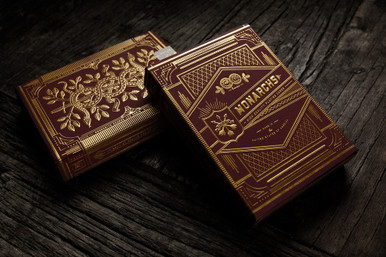 In 2011, Theory11 released the original Monarchs. They quickly became their best-selling deck, and has since then, defined a new standard for luxury playing cards. And now, in October 2013, they are back, freshly redesigned and dressed in red.

The team at Theory11 spent a great deal of time refining the world's finest deck. The result turned out better than they could ever imagine.

The back design is a vibrant and dramatic shade of red. The tuckbox was also upgraded. They introduced the highest quality paper ever used on a deck of cards. It is a luxurious new paper which gives the tuckbox a rich, matte finish — incredibly soft to the touch.

The goal was to make the deck of playing cards fit for a king. To make it the world's finest deck. It is Regal!

You are going to love them.