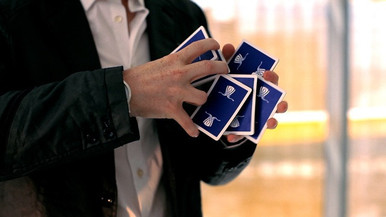 A collection of flourishes designed to challenge and inspire the contemporary cardist.

It’s 52 against one. Beat the odds. Discover Solo.

It all started in 2008 when Michael James began to develop card flourishes. In a world that is overflowing with extra long dribbles and unnatural geometric displays, Michael favors a classic approach where fluid and expressive motions are top priority in a card flourish. That is what you’ll find in Solo: Ten unique flourishes that demonstrate smoothness and articulation above anything else.

One of the most comprehensive cardistry projects ever produced.

A production that started nearly eight months ago has in fact been in the works for four years. Michael's style is inspired by card mavericks Brian Tudor, the Buck Twins, and Kevin Ho. These aren’t cuts you’re going to learn and forget in a day. Each cut is vastly different from the other, giving you a diverse collection that will broaden your arsenal.

Solo is divided into three categories: Signature Flourishes, Bonus Collection, and Special Features. It contains over 90 minutes of cardistry training.

The Bonus Collection includes four bonus moves: Upload, Skydive, Whirlpool, and Elite. These are short, simple flourishes designed to perform on the fly. Each move contains a performance, overview, and verbal explanation.

We made a conscious effort to include as much special features as possible. What's included: Original Trailer, Seamless Motion, Jikh and James, Rediscover Identity, Solo Outtakes, Interview with Michael James, and Credits with anamorphic footage.

What about Project One?

Michael published some of his ideas in an EP-like production called Project One. While he retained some of the cuts and ideas from Project One, you’re going to find a lot of new cuts and concepts that are exclusive to Solo. Overall, it’s a completely new and fresh experience.