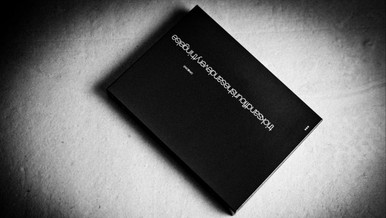 The Trilogy by Dan and Dave Buck

Dan and Dave have been at the forefront of their craft since they were only fourteen years old. They have helped mold a new genre of card magic, a style visually rich and direct. Their style and originality has received acclaim from such megastars as David Blaine and David Copperfield. When they were only 17 years old they performed alongside Guy Hollingworh, Paul Gertner, Chad Long and Bill Malone at the first MAGIC Live convention in Las Vegas, and were the only performers to receive a standing ovation. They were among the first to start a movement with card flourishes, also known as XCM (Extreme Card Manipulation) and cardistry with the release of The Dan and Dave System in 2004.

This collection contains a vast array of magical effects, flourishes and everything else their minds have conjured up. From beginner to professional, these DVD's contain something for everyone. Every effect is broken down step by step for a seamless learning experience.

Over 6 hours of material explained in detail with multiple angles, on screen text, and slow motion replays.

The Trilogy - Dan and Dave Buck (01:39)
More Info Here: http://tinyurl.com/6ej6bm Dan and Dave's best work ever. A three DVD box set crammed with masses of tricks, flourishes and more. Card Across A selected card is left protruding from half the deck in your left hand while the other half remains in your right hand. Instantly and without the packets ever touching their card vanishes and reappears protruding face-up in the right hand packet. The card can be signed! Fission for Aces An eight is turned face up on top of the deck. In a splitting action, the eight is ripped into two fours of matching color. One of the fours is handed out, as the remaining four is this time split at the fingertips into two twos. Lastly, as you can imagine, a two is split into two aces. This quick trick is extremely visual everything is done at the fingertips. Collectors We've taken this classic and usually boring effect and given it STYLE. Two cards are selected and lost in the deck. As the four aces are magically produced, the selections mysteriously appear between them. This is as visual as it gets. Swiss Made Heres a remix of the classic 'Back in Time' effect by Steve Freeman. If you know the Freeman trick, just imagine it with a face-up card and youve imagined this trick, seriously. In this effect you'll learn the 'db Spin Change', the most visual change we've created and the EASIEST change you'll ever do! Sixty Nine The coolest packet trick youll ever perform. The 4 sixes are shown with the added Buck flair. The performer jokes about how if he turns the six around it changes to a nine (pointing to an upside down six from the spectators POV). The next time the performer turns them around, they really do change to 4 nines and the cards can be handed out for examination. Hand to Mouth The spectator is instructed to push their protruding card flush with the deck... By this time the card is already in your mouth. The misdirection is so perfect that you will find yourself performing this surrounded without anyone having a clue. Our finesse and style differentiates this effect from previous handlings. Dj Vu Any card is selected and sandwiched between the two red aces; these cards are clearly placed on the table. Another card is selected, however, the performer miscalls it as the first selection. This second selection is face up on top of the deck. With a snap, the card visually transforms into the first selection sandwiched between the red aces. The cards on the table are spread to reveal the second selection sandwiched between the black aces. This is a beautiful transposition effect with a clever plot about dj vu that will leave you spectators wondering more about what they really just witnessed, or if it happened at all. TiVo Transpo Here's an instant two-card transposition effect. It can be done anytime and surrounded. Plus much, much more...