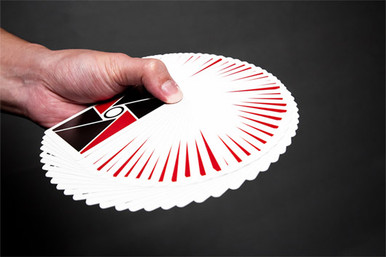 The Virts: "Card flourishing is a visual art. That's why the biggest question we constantly asked ourselves in the development of this deck was this: how can we make all your card flourishes look even better? That's why we developed the Virtuoso deck with a concept we call 'Adaptive Aesthetics'."


With quality as a base, we then gave the Virtuoso deck a well-balanced feel for optimal card flourishing. We took the classic Tally Ho Linoid finish that card flourishers know and love, and applied it onto a modern casino-grade stock to our specifications.

The Virtuoso deck has a very balanced weight and feel. It gives you all the feedback you need when handling the cards, so you can easily calibrate the style and feel of each flourish as you do it.

The deck fans with amazing control, splits into clean packets when cutting, and packets stay together when flying through the air.

It is also just the right thickness, so you have really comfortable control, all while maintaining a satisfying resistance for cuts and long springs. The cards also have that awesome "snap" that card flourishers love, and that gives you spectacular air time when shooting cards through the air.

The very deck you’ll be holding in your hands isn't only made by the best playing card manufacturer in the world, they’re made with the highest production standards they could give us.

The Virtuoso deck is produced by United States Playing Card Company (USPCC), in Q1 standard to ensure the highest quality possible of your deck. It is also exclusively printed on USPCC's web press, the very same press used by the largest casinos, ensuring world class durability, feel, and finish.

This way, compared to an average deck, your cards last longer, don't clump as quickly, greatly improving your flourishing experience and making it that much more addictive.